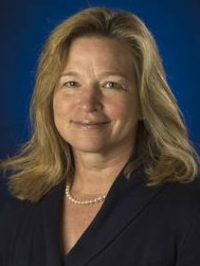 Dr. Ellen Stofan is the John and Adrienne Mars Director of the Smithsonian’s National Air and Space Museum. Stofan started in April 2018 and is the first woman to hold this position.

Stofan comes to the position with more than 25 years’ experience in space-related organizations and a deep research background in planetary geology. She was chief scientist at NASA (2013–2016), serving as the principal advisor to former Administrator Charles Bolden on NASA’s strategic planning and programs. She helped guide the development of a long-range plan to get humans to Mars, and worked on strategies for NASA to support commercial activity in low Earth orbit as it transitions from the International Space Station (ISS) to sending humans to the moon and Mars in the mid-2020s. She supported NASA’s overall science programs in heliophysics, Earth science, planetary science and astrophysics. While at NASA, she worked with President Barack Obama’s science advisor and the National Science and Technology Council on science policy.

She earned her bachelor’s degree in geology at the College of William & Mary in Williamsburg, Virginia, and her master’s and doctoral degrees at Brown University, both in geological sciences. While finishing her doctoral degree, Stofan joined the Jet Propulsion Lab (JPL) as a post-doctoral fellow and became the deputy project scientist for the Magellan Mission to Venus.

In 1994, Stofan became JPL’s chief scientist for the New Millennium Program where she managed a team of about 100 scientists working on new technologies. The following year, Stofan moved to London while continuing to work at JPL and was, and continues to be, an honorary professor at University College London.

For 13 years (2000–2013), Stofan was vice president and senior scientist at Proxemy Research, a consulting firm in the Washington area specializing in planetary research.

Stofan’s research focuses on the geology of Venus, Mars, Saturn’s moon Titan and Earth. Her favorite mission was Cassini, primarily because of her interest in Titan.

She is co-author of the books Planetology: Unlocking the Secrets of the Solar System and Next Earth: What Our World Can Teach Us About Other Planets, both published by National Geographic.