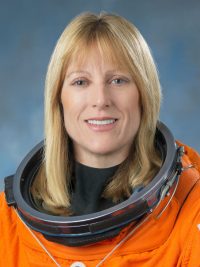 Following the repeal of the Title 10 U.S.C. combat aircraft restriction for female military aviators in 1993, Hire was the first female in the U.S. military assigned to a combat aircrew, reporting to Patrol Squadron Sixty-Two (VP-62) on May 13, 1993 as a Navigator/Communicator flying the P-3C Update III Orion maritime patrol aircraft. VP-62 was also based at NAS Jacksonville and Hire routinely deployed for flight operations throughout the North Atlantic, Europe and the Caribbean.

NASA experience
Hire began work at the Kennedy Space Center in May 1989,first as an Orbiter Processing Facility 3 Activation Engineer and later as a Space Shuttle Orbiter Mechanical Systems Engineer for Lockheed Space Operations Company. In 1991 she was certified as a Space Shuttle Test Project Engineer (TPE) and headed the checkout of the Extravehicular Mobility Units (spacesuits) and Russian Orbiter Docking System. She was assigned as Supervisor of Space Shuttle Orbiter Mechanisms and Launch Pad Swing Arms in 1994.[1][2][3]

Selected by NASA in December 1994, Hire reported to the Johnson Space Center in March 1995. After a year of training, she worked in mission control as a spacecraft communicator (CAPCOM). Hire flew as Mission Specialist-2 on STS-90 Neurolab (1998) and logged over 381 hours in space. She served as the Astronaut Office Lead for Shuttle Avionics Integration Laboratory (SAIL), Shuttle Payloads, and Flight Crew Equipment. Hire was assigned to the Astronaut Support Personnel (ASP) team for Kennedy Space Center Operations. She then journeyed to the International Space Station as a Mission Specialist for Space Shuttle mission STS-130.

Space flight experience
STS-90 Neurolab (April 17 – May 3, 1998). During the 16-day Spacelab flight, the seven-member crew aboard Space Shuttle Columbia served as both experimental subjects and operators for 26 life science experiments focusing on the effects of microgravity on the brain and nervous system. The STS-90 flight orbited the Earth 256 times, and covered 6.3 million miles.

As of June 2018, Hire is considered a “NASA Management Astronaut”, which means that she is employed at NASA but are no longer eligible for spaceflight assignments.[4]

Previously, Ms. Moses worked at NASA’s Johnson Space Center where she served as the Extravehicular Activity System Manager for the International Space Station from design through on-orbit construction. Ms. Moses received her Bachelor’s and Master’s degrees in Aeronautical and Astronautical Engineering from Purdue University. She is the recipient of Chicago’s Adler Planetarium annual Women in Space Science Award and a Google Science Fair judge.